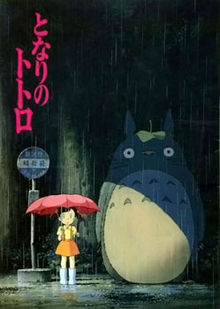 Title: My Neighbor Totoro
Or: Tonari no Totoro
Movie
adventure, comedy, supernatural, forest spirits, magical creatures
Directed by: Hayao Miyazaki;
Written by: Hayao Miyazaki;
Studio: Studio Ghibli;
Year: 1988;
Watched: no idea;
Subbed: eng  by AnimeUnion [AU] (though this anime is not in a list, but it was written in a movie I watched)
MAL: 8 (very good); 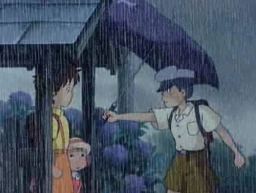 When I watched this movie I swore to myself that when I’ll have children I will definitely watch it with them. Its like a come back to a childhood, when you still dream and run barefoot, when you actually can trip and fall into a mud pool and not make a fuzz about it, when <–sympathy is still innocent and cute, when climbing trees feels exiting and not thinking i will break my leg if I fall.. It reminds me of a true and pure childhood (which every one of us should have). 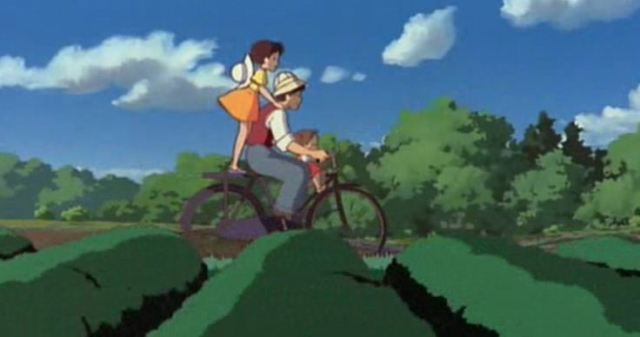 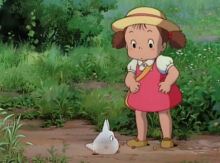 What a moment thats not Totoro.. Thats mini TotoroThats more like it

The plot is simple – its about two little girls (sisters), who moves to a country with their father. Their mother is in hospital, so they wait for her to come back. And as they are young they live their childhood to the fullest. The nature and countryside of their new home is beautiful, so they start to explore it. Mei —> accidentally meets a spirit (?) of the huge tree near their home – Totoro. Later Satsuki meets him also, as they wait for their father in a bus stop (legendary scene, observe below). Eventually sisters have a fight as their mother can’t come home and Mei runs off and gets lost. But with a help of Totoro and Catbus (meet below legendary scene), Satsuki finds Mei and everything goes well. 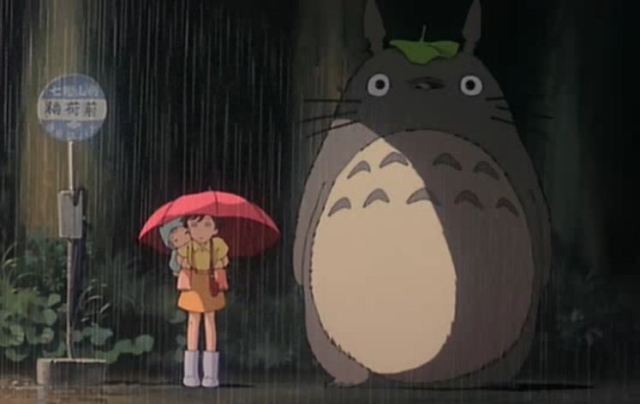 ^….just awkward… I love the leave

^shared the umbrella.. now its a bit better 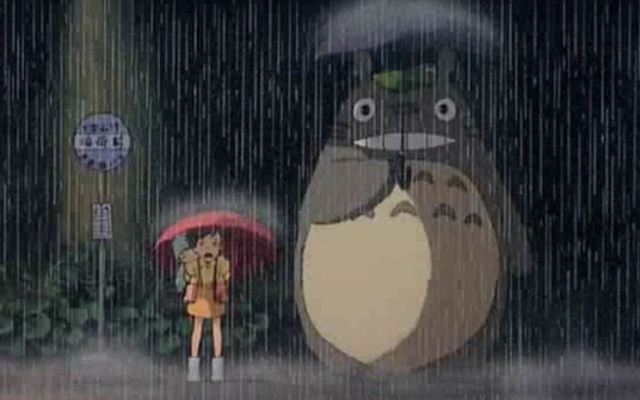 ^”Totoro liky the raindrops on the artificial leave with the stick” 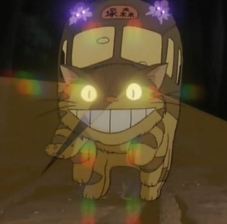 Now who has 12 legs, shining eyes, rat-like lights, soft fluffy chairs and can run as fast as wind? yes its a Catbus! 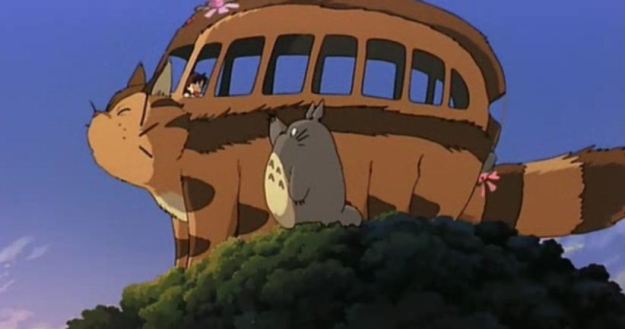 I guess nobody except Hayao Miyazaki can make a movie which is so realistic and so unrealistic at the same time. 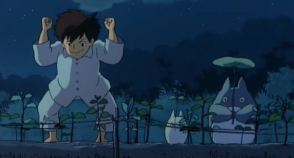 All the relationships and people are so realistic – girls are simple young girls, who run around, grow trees–>, explore and are full of joy.. Adults are just adults with their problems and works. But what I loved about this movie was an idyll of their family – though they have problems, and they fight sometimes, but it has that simple feeling, everything your imagination can bring

on will be fine, father don’t call Mei a lier or stupid when she tells about Totoro, he just says that she is lucky to meet him and that not every body can do that. He sees them as small kids who have big imaginations and lets them to have it, while having fun along the way. Thats something most us didn’t have, how many of you had to grow up faster than than you should?Anyhow the father is cool.. he has that some child inside which adults usually lack.. 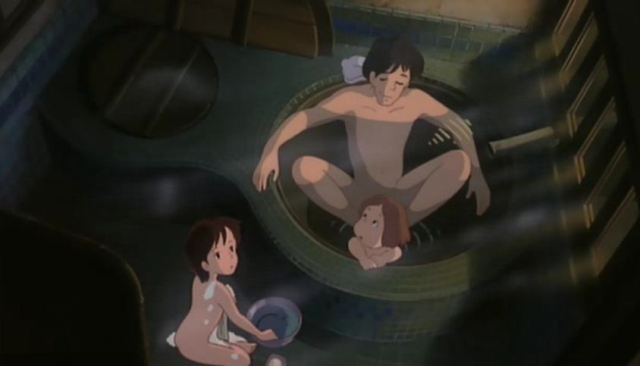 ^just taking a bath, when suddenly ghosty sounds break up!! what smart person do? 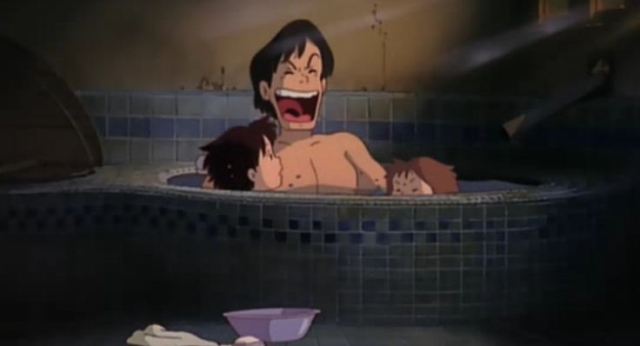 ^ he starts to laugh his guts out, because its the best way to keep any ghost away 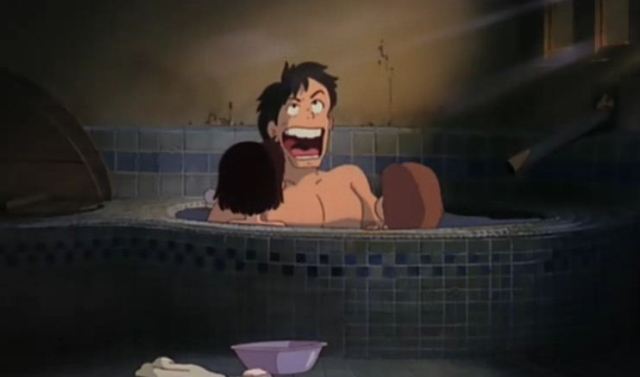 ^and then laughs some more… 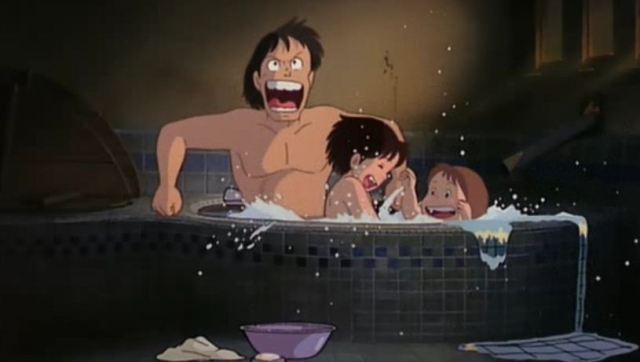 Anyway even without a lot of action or big scenes, this movie is moving and sweet. I laughed at it so much even though maybe its silly, but I felt like a child at least for that hour. Its like eating ice cream on a hot summer day (and all movie just screamed “SUMMER” into my face, while we have around -20 outside, I want summer *sniff*) or running barefoot on the soft grass.. 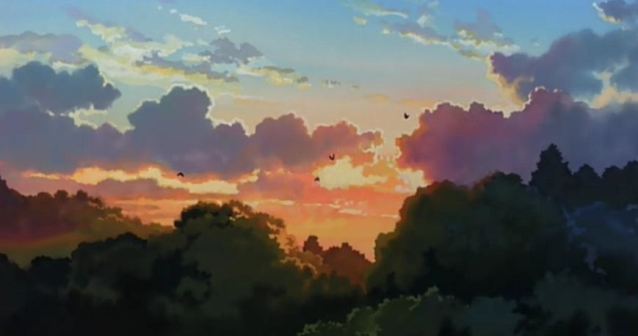 This entry was posted in Movie and tagged Before 1990, Hayao Miyazaki, My Neighbor Totoro, Studio Ghibli, [AU]. Bookmark the permalink.