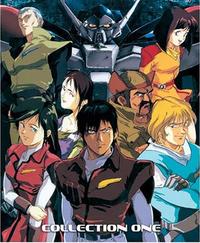 Others I won’t mention because its just too many, Wikipedia gives kinda good list of all of them. 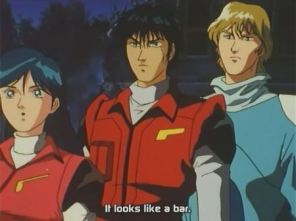 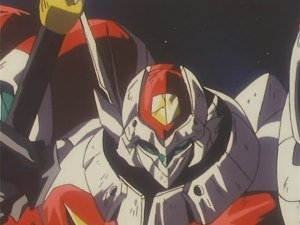 First to mention – I saw Japanese version, that you can see from the names of characters, I don’t really know the difference, but I suppose that not only names were different…

Probably I should tell a bit of the story. Main idea is that earth is in danger, because it is attacked by aliens called Radam – huge monsters, big plants and also tekkamans. And main hero is also one of them, though he escaped (by help of his father) and didn’t become full tekkaman. So now he’s the only one that can fight the evil.

Its old anime. You can feel it from animation and from the story. Kinda transformers type story and actually a lot of repeating. I just skipped some series because they were repeating what was before. well putting that aside there are some things i don’t flatter also. Like d-boy has to kill all of his family because actually they are the tekkamans. All his family was taken into the ship of aliens and turned into tekka things. Only he and his sister saved their humanity. So basically its family killing in white light. At least it is shown how heavy it is on the boy, and how he suffers because of that. But that makes anime gloomy. And even the funny moments that Robin (mechanic, who is a boy but acts as a girl)  tries to do doesn’t make sadness go off. All the pressure of d-boy fighting his brothers, his friends would make any other go mad (which actually almost happens in the end). To kill your own twin brother with your hands ( i know that sometimes we all want to strangle that stupid mf… ahrr why he deleted my saves on ff, but imagine that you actually need to do that). Its like killing part of yourself.. And in the end you are left alone with huge fault on your heart, probably that’s why he looses his memory in the end.

Ok I talked about not fun things (and kinda lot…), lets talk about some nicer. Like Aki. She falls in love with D-boy, though he doenst show that much of attention and is like that ah-i-am-so-hero-i-don’t-see-anything-else type guy. But still eventually they get together, (which was the most exiting place in all anime for me. Hmm come to think of it: did I became a romantic freak? oh noooooo…nooo..noo.. well it could get worse – I could become loli freak.. God NO!! fui). Lets get back to business so still it was a bit cute. (HA HA – old cheesy laugh) 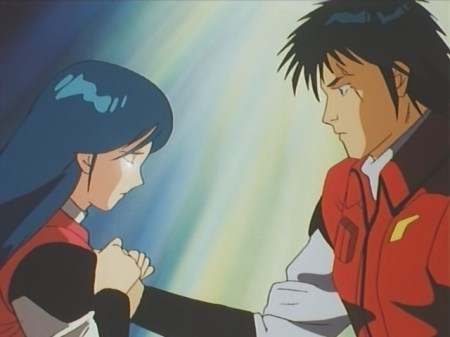 Other cute thing that happened in this anime. Small detail that I liked. There was a robot named Pegas, that helped Blade to transform  after an accident that his crystal (which he needed to transform) broke down (too much info in one sentence don’t you think?). So the where was I? ah ya the robot. Lets take a look at it: 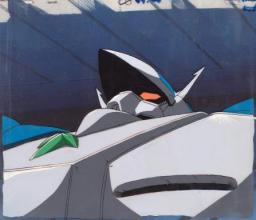 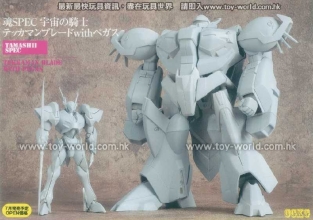 Hmm first picture doesn’t give a lot of info about his size. He’s actually very big, and has artificial inelegance, so can learn things and so on. So lets add second one, action figures that are made more or less actual just smaller. the smaller one is Blade, and biggy is Pegas. and that smaller always bosses  the big one around because he need it to transform, so big one tags along (he’s not that bright anyway, as he is still robot). But that’s not the point I wanted to stand out (and I just blurbed about it half of page) the main thing I liked about Pegas was his way of saying roger – do you know how’s it in Japanese? I know now because of this big fella – its Lasa!!! cute word I have no idea why.. (I’m strange) and imagine the big strong robot in low loud voice saying LA-SA! (it took me two days to find the video…now I’m super strange)… It was so cute I could just rofl and cry my tears of pure cuteness and joy… (i should stop here while i didn’t get my self in more nonsenses and didn’t write anything that even deleting wouldn’t erase) 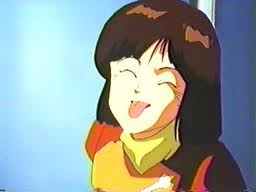 So I think that’s enough for my investigation on this anime. (btw <-that’s Milly – very cute, nice and innocent girl having actually a big part in anime, so I just have to mention her.. uh sweet kid)