Looong list, don’t you think? well anyway its 12 sisters in there so it can’t be helped.

<—And that’s a lucky bud

. Somehow I still don’t really believe that everyone would be so happy to be in his place. Imagine when all of them have PMS… better not to get in the way… though this anime is sweet and shows that they all are like little angels and just want to be with their “beloved brother” and act so totally nice and adorable. Not realistic. But has its own charm.

But I started from the middle somehow. lets move to the start. Some story. A guy messes up and doesn’t get into school he wanted, actually in none school, so has to go so some island

to attend school he is offered. There he meets up with 12 of his sisters and one that he also thinks to be his sister – Mami ———————–> That’s not revealed very much. she is there to inspect him and somehow to get him off the island. (I love her email sound on the mini computer ^.^)

But story is all about the relationship between Wataru and his sisters and how he gets to know them. there is at least one episode specially dedicated to one sister and story about her. Everyone of them has her own way of calling him, her ability, her character and so to say her world. All of them are totally different except the fact they all are sisters and are cheerful, nice, innocent, sweet and well… like angels. This anime has this nice and worm feeling of happiness that lies somewhere deep inside of all of us.

The ending is weak. I expected something more, but actually from all the story I shouldn’t 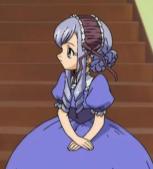 have, so its more like my fault. Out of all that bunch of girls the favorite of me was Aria (->). She had something strong inside of her. she’s cute, is one of the youngest and is like a kid. I don’t know what exactly but there is something about her, that is so beautifully nice. Also I love her hairstyle, I wish I could do the same with mine.

Other one I liked a lot was the youngest one Hinako. She was so childish, but on the other hand more realist of all of them. She had that nice active girl image on her that doesn’t annoy.

I was watching eng dub version (not the best quality, but that’s not the case) so I liked also Haruka because every time she said something to her brother she usually added “Blush” in the end of the sentence, so looked like a manga with you know those little words meaning the sounds and so on. cute.

What I didn’t like (and usually don’t like in anime) is a not so brother-ish and sister-ish relationship (i mean more lover kind), that sometimes still occur. Though creators avoid that loli stuff (so younger ones are not involved), but the actions of some sisters (specially Sakuya) sometimes brings double minding in front. Also other thing that you get a feeling of – is strong harem. Only one leading male in front and 13 girls going around him, thinking about only him, making him happy, and doing everything for him.. imagine that.. and eventually i almost got sick of all that brother dear going on.. no other action..